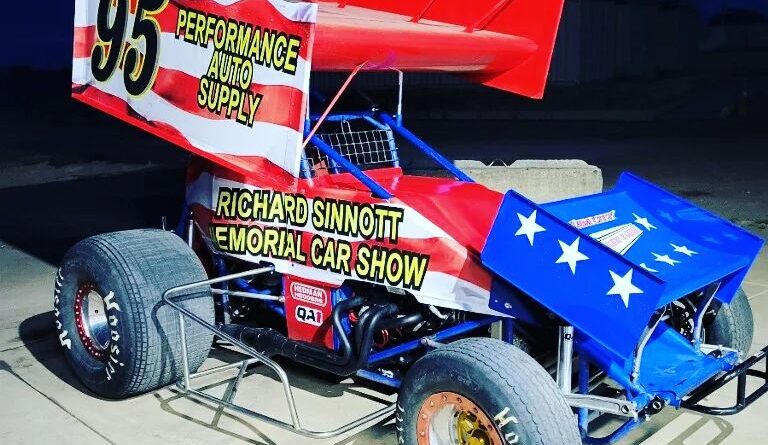 Marysville, CA – (6-26-22) …The bright lights, patriotic songs, and the sounds of race car engines will fill the air this Friday night, July 1st, at the Marysville Raceway. Kickstart the Holiday weekend with the annual Fast Cars and Freedom event, in Tribute to Richard Sinnott, featuring winged 360 sprint cars, Crate Sprints, and IMCA Sport Mods. Following the action on the track, a gigantic fireworks show will fill the nighttime skyline with red, white, and blue bright lights.

Kids 11 and under, when accompanied by an adult are FREE! Adult ticket price is $18.00 (16-61), Juniors/Seniors/military discount with card $15.00. As always, parking is FREE at Marysville Raceway. Direct link to purchase your tickets online can be found here https://www.eventsprout.com/event/marysville-raceway-2022

Front gate is scheduled to open at 5:00 PM. Pit gate for the competitors will open at 2 PM.

If it wasn’t for Richard Sinnott, none of us would be here racing and celebrating America’s Independence on this upcoming Friday night, July 1st. To put it simply, Sinnott, had a vision to combine a Flea Market next to a racetrack on the same plot of land. While the family leases out the Raceway, the Flea Market is a family affair, and is a must attend destination for local shoppers. Sinnott was also into fast cars and was a custom car collector. In fact, following his passing, the family still has many of his custom cars that they enjoy putting on display.  Each year the family holds a Richard Sinnott Memorial car show at the Flea Market. The Raceway has asked the family to display some custom hot rods at this Friday nights race. We will park the show cars behind the grandstands. The Raceway is proud to add a Memorial Richard Sinnott plaque on the base of the tracks flag stand that is erected in the infield. It will be a special night.

The winged 360 sprint cars are led by Bobby Butler. The top five in points are only separated by 23-points. Michael Wasina sits in second, just three points behind. Korey Lovell is only six-points back of Butler in third. Carson Hall and Kevin Lovell round out the top five. Some heavy hitters are expected to race the Friday night show led by Auburn’s Andy Forsberg.

Speaking of great championship battles, the Crate Winged Sprint cars have a traffic jam at the top. Britton Bock leads the series by just three-points over Brett Youngman. Jason Ballentine is third, just six-points back. Mike Hall is fourth and seven-points behind Bock. This years Crate Sprints have produced fantastic racing.

Jimmy Ford continues to lead the IMCA Sport Mods. Ford holds a seven-point edge over Scott Savell. Hunter and Shaun Merritt are tied for third. Each have a total of 204 points. This Friday’s race will mark the seventh race of the season for the IMCA Sport Mods.