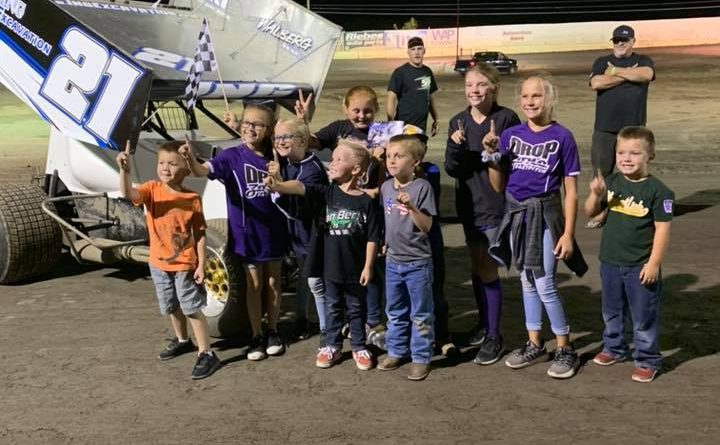 Marysville, CA (Aug 10, 2019) – The fans of Marysville Raceway enjoyed another stellar night of racing with a large car count for kid’s bike night. The Saturday night show produced 15 winged 360 sprints, 18 IMCA Pepsi Sport Mods, 14 Hobby Stocks and 6 Super Stocks. After the heat races, the kids took center stage and raced on the famous dirt track for trophies and ribbons. The excitement of seeing these young kids race on the dirt track and in front of a large crowd is still exciting. We also appreciate all the drivers who came out to be a part of the kid’s night festivities.
The opening lap of the IMCA Sport Mod feature was hectic. Two separate wrecks in turn three and turn one brought out the yellow. The ensuing restart saw Justin Funkhouser get spun going into turn three. Eric Phillips came to a stop in turn one. All this happening with only one lap completed. David Larabee led the next few laps with Timothy Allerdings behind him. Todd Cooper was on the charge. Cooper passed Larabee coming to complete the eighth lap. Just as Larabee got passed his car slowed and he turned towards the infield and stopped. The race resumed until lap 17 when Phillips stopped for a second time. Cooper had amassed over a full straightaway lead up to the point. On lap 19, Damian Merritt hit the turn two wall and the race was slowed again. Cooper led the final two laps with ease to get this third win of the season during point racing. Cooper won the first heat race also. Justin Funkhouser started fifth but captured the win during heat two. Phillip Shelby dominates the third and final heat race.
Wyatt Brown led the 15-car starting field to the green flag of the 25-lap winged 360 sprint car main event; however, he spun going into turn three and came to a stop. The rest of the field did a good job avoiding him. The ensuing restart saw rookie sensation Caden Sarale led the event. In fact, the youngster led the next 22 laps. He was fast and smooth. On lap 22, things went south for Sarale. He drifted high going into turn one and as he came back to the middle of the track Bobby Butler was already there. Butler’s right rear had slight contact with Salare’s front end resulting in Sarale coming to stop in turn two. Sarale’s car needed to be towed off but it was a great effort for this kid who shows great promise in a winged sprint car. Butler led the field back to the green flag restart. On lap 23, Butler bicycled going through turn one and this opened the bottom up for Michael Ing. As Butler did a great job to save the car, Ing drove by for the lead. Ing went on to lead the final lap and score his 6th win of the season. Steel Powell earned fast time with a 12.455. Powell dominated the first heat race. Bobby Butler dominates heat number two.
Richard Vander Ploeg led from the start of the Super Stock race. Matt Micheli ran in the second spot. Micheli tried numerous times to get around Vander Ploeg. On lap nine, Micheli finally saw an opening and drove up to the inside of Vander Ploeg. The two raced side-by-side into turn three and unfortunately there was contact that sent Vander Ploeg around. The yellow was waived. Under the yellow flag, Vander Ploeg showed his displeasure with Micheli and rammed Michlei’s car. Vander Ploeg was disqualified while Micheli was done for the night. This moved Tyler Lightfoot up into the top spot. He went on to lead the final five laps and pick up his first win. George Magenheimer was second. Brent Lawrence was third. Matt Micheli won the eight-lap heat race for the super stocks.
The Hobby stock main event started with William Merritt losing a tire and Zach Lindgren running over it on lap one. Up front is was David Allen who was leading. On lap three, Allen gave up the lead to Rick Lloyd. On lap five Devin Ryan took the lead. Ryan went on to lead the next 15 laps and record his first win at Marysville in 2019. Jesse Van Roekel has been quick all season long and shadowed Ryan for most of the event. Van Roekel came home with a second-place finish. David Caluya ran in the top five most of the race. He finished third but was disqualified post-race. This moved Lindgren up to third after rebounding from that early tire mishap. Mike Stoeckle charged from 11th to fourth. Allen was credited with the fifth-place finish.
Full results can be found here https://speedhive.mylaps.com/Events/1707806