Wild Night of Racing During Fast Cars and Freedom Event 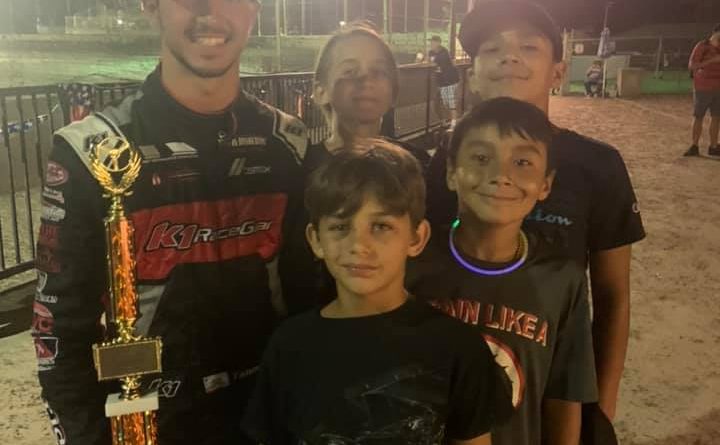 Wild Night of Racing During Fast Cars and Freedom Event

Tanner Carrick clean swept the night at Marysville Raceway by winning the 25-lap sprint car feature event, earning top honors in heat one, and he turned the quickest lap in qualifying.  Carrick’s performance was even more impressive given that 32 competitors signed in to race during point show number nine.  Carrick picked up an extra $100 courtesy of Paul Olmsted Plastering with the fastest lap in time trials at 13.216.

Other winners included Brett Youngman, Jay Norton, and Phillip Shelby.  In all, over 60 cars lined the pit area for the Fast Cars and Freedom event.  The show came to a stop following the winged 360 sprint car A main event to shoot off the fireworks for the crowd.  Racing resumed following the fireworks show.

Opening lap of the sprint car race had Jodie Robinson leading the field into turn one.  On the following lap, Carrick seized the moment and took the lead.  Andy Forsberg then battled Robinson for second.  Both Forsberg and Robinson put on a show for the next few laps with Andy ultimately getting the second spot.  Heartbreak city for Robinson as she smacked the turn one wall on lap 10 and flipped over.  Fourth place running Ryan Timms could not avoid her and was collected also.  This moved Bobby Butler into third, Brad Bumgarner fourth and Angelo Cornett into fifth.  The driver on the move was Blake Carrick.  Blake had a poor qualifying effort that put him in a deep hole all night.  Give the kid credit, he started 18th and ultimately raced his way to a fourth-place finish.  Korey Lovell brought out the final caution on lap 23.  The final two laps Carrick held off Forsberg with ease.  Butler was third.  Cornett had another solid night and finished fifth.  Shane Hopkins earned an extra $100 by finishing in seventh.

John Clark did a nice job in winning the 12-lap B main event.  Cornett was second.  Billy Wallace finished third and Koa Crane earned the fourth and final transfer.  Heat races were ultra-exciting tonight.  Timms, Forsberg and Butler each won their eight-lap heats.

Jay Norton passed Dan Brown Jr. on the last lap to win the 20-lap Limited Late Model feature.  Brown had led the previous 19 laps.  Brown drifted just wide out of four and allowed Norton the inside groove.  Ray Trimble was third.  Eddie Gardner was fourth and Wayne Trimble was fifth.  Norton was perfect tonight also by winning the eight-lap heat race.  The final lap was a fitting way to end the night.  Plenty of on track and off-track fireworks.

Mike Merritt was credited with leading the first lap of the IMCA Sport Mod main event.  Jeremy Phillips passed Merritt and led the next 14-laps.  Behind him, there was utter chaos most of the race.  On lap four, Mike Merritt spun and collected Todd Cooper.  Brian Cooper moved into the second spot.  By lap seven, Phillip Shelby raced his way into third.  On lap 11, Shelby passed Brian Cooper for second.  Shelby then passed Phillips on lap 12 but a car spun, and the yellow was needed so the lead was given back to Phillips.  On lap 13, a red was needed when Scott Savell and Damian Merritt got wedged together in turn two.  Red stopped the remaining cars to help the track workers pull apart the two wedged cars.  On lap 16, Phillips left the bottom open coming out of turn four.  Shelby made his move for the lead.  The two raced into turn one.  Phillips knew he had to try and keep ahead of Shelby and drove the car deep into turn one.  Unfortunately, Phillips car would not stick and he spun out.  Jimmy Ford had worked his way into third, but it looked like a mechanical problem arose and he drifted back to a 10th place finish.  At the checkered flag, Shelby won the race, beating Brain Cooper by 2.228 seconds.  Mike Merritt came back to finish third. Brian Cooper won the first eight-lap heat.  Shelby won heat two and continued the theme of drivers who clean swept tonight.

Eighth place starting Brett Youngman took the lead on lap seven and went on to win his fourth main event in a row for the Crate Sprints.  Cameron Haney Jr. jumped out to the lead but going into turn three his car came to a stop.  The restart produced Dusty Barton as the leader until David Simms crossed the line first.  Simms led the next five laps until he nearly spun and came to a stop in turn four.  Youngman took the lead after the restart and never looked back.  He won by over four-seconds.  Barton and Jason Ballentine had a spirited battle for second.  The final ten laps produced an epic battle between those two drivers.  With two laps to go, Ballentine was able to secure the second spot.  Simms raced his way back to fourth.  Wyatt Van Lare rounded out the top five.  Jason Ballentine won heat one while Barton earned the win in heat two.