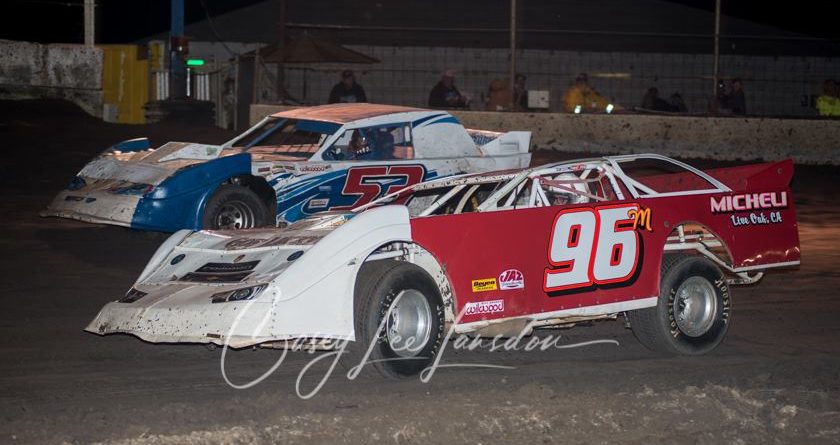 Marysville, CA (Aug 6, 2019) – Another great event is planned for this Saturday night, August 10th, as the kids will be front and center at the Marysville Raceway. The annual kids bike night celebrates the youth of our sport. Kids 11 and under will be admitted FREE. They will also receive a coupon, good for a soda and hot dog, and get a raffle ticket for a chance to win a new bike. It is also important that they come with their bmx style bicycle because at the half-way point of the evening, the kids get to race on the same strip of dirt that their racing hero’s do. Kids who participate in the bike races will receive trophies or ribbons. Saturday’s event is filled with good times for the entire family.
Of course, the on-track fireworks will be led by a four-division night featuring the winged 360 sprints, hobby stocks, IMCA Pepsi Sport Mods and the super stocks. Each division is eager to return to the track after a two-week hiatus. The ground will be shaking this Saturday with the excitement of big-time grass roots auto racing.
The pit gate will open at 3 PM while the front grandstand gate opens at 5 PM. Race cars on the track at 6 PM.
Adult admission into the grandstands is $13.00. Juniors, seniors and military with ID are just $11.00. Kids 11 and under are FREE. As always, parking is FREE.
While Chico’s Michael Ing leads the way in the winged sprint car division, he will have plenty of competition this Saturday. Three-time champion, and the winningest driver in Marysville Raceway history, Colfax’s Colby Wiesz, is set to return. When you also add in other former track champions like Grass Valley’s Billy Wallace and Yuba City’s Korey Lovell, the sprint car division will be loaded with talent. With all that said, Ing is still the driver to beat with his five main event wins in 2019.
The IMCA Pepsi Sport Mod division has really produced some great racing this year. Todd Cooper continues to lead this talented group of drivers. Andrew Peckham is right behind him with three wins. Cooper leads Peckham by just 15-points. Cooper has two main event wins this year. Third through six is a muddy mess. Scott Savell sits in third, 34 points back of Cooper, but just one point ahead of Mike Merritt. In turn, Merritt is just two-points ahead of both Thomas Reynolds and Jim Waller. All six drivers mentioned have attended all seven shows this season.
What a championship battle is brewing in the hobby stocks. Jesse Van Roekel leads Devin Ryan by just two points heading into Saturday’ showdown. These two have distanced themselves from third spot David Caluya, Mike Stoeckel and Eric Phillips. This division continues to amaze with eleven full-time drivers and teams chasing the championship. Not only has the car count’s been great, but the racing is second to none. Close finishes have highlighted a resurgence season for the hobby stocks.
Matt Micheli continues to lead the way in the Super Stock division. Micheli has won four of the six races completed this season. The other two wins have gone to Ryan McDaniel. Micheli is also leading two divisions at the Silver Dollar Speedway in Chico. It would be a historic year if Micheli can win all three in the same season. Veteran Richard Vander Ploeg is 17-points back in second. Brent Lawrence and George Magenheimer are out of the championship hunt, each tied for third sum 66-points out, but will wage their own race to beat each other.
END